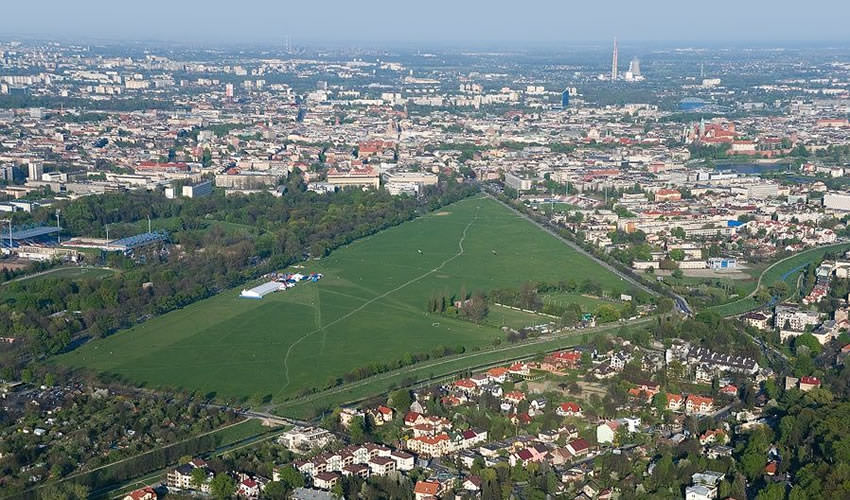 The great wedge of a green space that is the Błonia meadow sits on the western haunch of the city.

It’s not much to look at in the winter when it becomes caked in ice and snow, but summertime brings runners, dog walkers, roller-skaters, cyclists, and open-air music festivals.

Błonia Park is a vast meadow with an area of 48 hectares directly adjacent to the historic center of the city of Kraków, Poland.

The history of the park began in 1162 when a wealthy nobleman Jaksa z Miechowa – founder of the Polish branch of the Order of the Holy Sepulchre – donated the land between Zwierzyniec and Łobzów to Norbertine Nuns.

His intention was to receive a blessing prior to his pilgrimage to the Holy Land.

For the next two centuries, the meadow belonged to nuns, who in 1366 exchanged it with the city’s authorities for a manor at Florianska Street. The meadow was used by peasants from neighboring villages to graze their cattle.

Until the 19th century, Błonia Park was largely neglected and often flooded by the Rudawa river in the spring turning it into a wetland with small islands, probably contributing to the spread of epidemics.

In 1809, when the city was incorporated into the Duchy of Warsaw, Błonia was a place of the salute of the troops of Napoleon, organized by Prince Jozef Poniatowski and General Jan Henryk Dąbrowski.

The opening Mass of the 2016 World Youth Day was held at Błonia Park in July 2016, however, the main events, including the Mass celebrated by Pope Francis, were held outside the city.

The vast meadow was also used for politicized promotion of the Małopolska region farming industry by PSL in 2011 with a herd of 150 sheep trucked in from hundreds of kilometers away for one month, and city permits worth 3,200 złoty.

The last cattle grazed at Błonia in the 1970s.