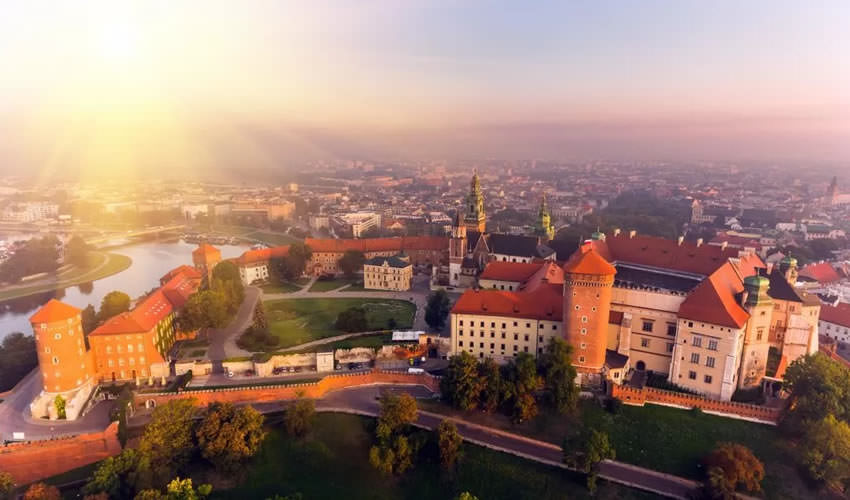 Weather and Climate in Krakow

Kraków lies in the southern part of Poland, on the Vistula River, in a valley at the foot of the Carpathian Mountains, 219 m  above sea level; halfway between the Jurassic Rock Upland (Jura Krakowsko-Częstochowska) to the north, and the Tatra Mountains 100 km to the south, constituting the natural border with Slovakia and the Czech Republic; 230 km west from the border with Ukraine.

There are five nature reserves in Kraków, with a combined area of ca. 48.6 hectares.

Due to their ecological value, these areas are legally protected. The western part of the city, along its northern and north-western sides, borders an area of international significance known as the Jurassic Bielany-Tyniec refuge. The main motives for the protection of this area include plant and animal wildlife and the area’s geomorphological features and landscape.

Another part of the city is located within the ecological ‘corridor’ of the Vistula River valley. This corridor is also assessed as being of international significance as part of the Pan-European ecological network.

The city center is situated on the left (northern) bank of the river.

Officially, Kraków has a temperate oceanic climate, best defined as a semi-continental climate.

In older reference periods it was classified as a warm summer continental climate, it has a warm temperate climate in the center of continental Europe with the “fusion” of different features.

Due to its geographic location, the city may be under the marine influence, sometimes Arctic influence, but without direct influence, giving the city variable meteorological conditions over short spaces of time.

Being towards Eastern Europe and a relatively considerable distance from the sea, Krakow has significant temperature differences according to the progress of different air masses, having four defined seasons of the year.

During very cold nights the temperature can drop to −15 °C.

The city lies near the Tatra Mountains, there are often occurrences of halny blowing (a foehn wind), causing temperatures to rise rapidly, and even in winter reach up to 20 °C.

In relation to Warsaw, temperatures are very similar for most of the year, except that in the colder months southern Poland has a larger daily temperature range, more moderate winds, generally more rainy days, and greater chances of clear skies on average, especially in winter.

In addition, for older data, there was less sun than in the capital of the country, about 30 minutes daily per year, but both have small differences in relative humidity and the direction of the winds is northeast.

The climate table below presents weather data from 2000 to 2012, although the official Köppen reference period was from 1981 to 2010 (therefore not technically a climatological normal).

According to ongoing measurements, the temperature has increased during these years as compared with the last series. This increase averages about 0.6 °C over all months.

Warming is most pronounced during the winter months, with an increase of more than 1.0 °C in January.