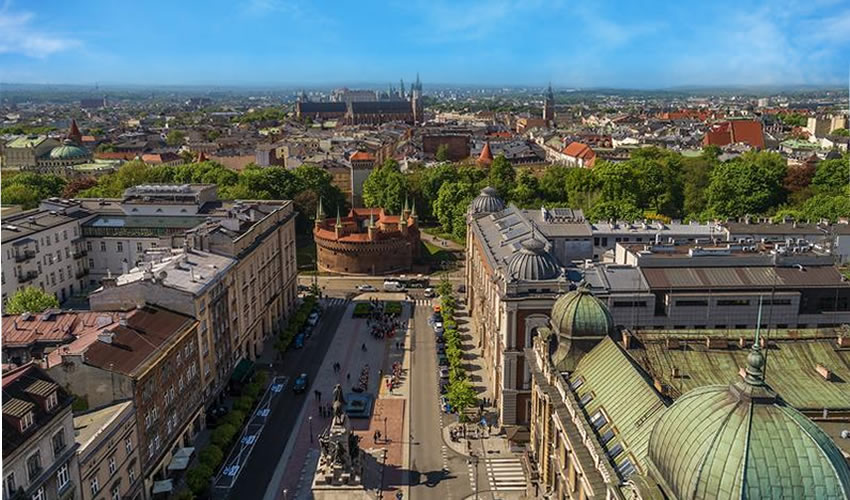 The Royal Road is the ceremonial route that kings and other celebrities proceeded through Krakow when the city was Poland’s capital. Now the road still links most of Krakow’s Old Town landmarks.

The Royal Road or Royal Route (Droga Królewska) begins at the northern end of the medieval Old Town and continues south through the center of town towards Wawel Hill, where the old royal residence, Wawel Castle, is located.

The Royal Road passes some of the most prominent historic landmarks, providing a suitable background to coronation processions and parades, foreign envoys, and guests of distinction traveling from a far country to their destination at Wawel.

The monarchs used to enter through the main of the city’s eight gates, the Gothic Florianska gate.

The Royal Route across Krakow

The Royal Road starts outside the northern flank of the old city walls in the medieval suburb of Kleparz, now a central district of Kraków.

The Royal Road crosses Matejko Square (pl. Matejki), passes the Academy of Fine Arts (Akademia Sztuk Pięknych) on the right-hand side, and crosses Basztowa Street – to the medieval barbican (Barbakan).

The Gothic-style Barbakan, built in 1499, is one of only three such fortified outposts still surviving in Europe and also, the best preserved.

The Road passes the old fortifications through Floriańska Gate under a defensive tower. It is the original entrance to the city and the only gate, of the eight city gates built in the Middle Ages, not dismantled during the 19th-century modernization of Kraków.

Inside the Old Town, the Royal Road continues along Floriańska Street and enters the Main Square.

On the left-hand side, at the northeast corner of the square stands St. Mary’s Basilica, home of the oldest and the largest Gothic altarpiece in the world. At the center of the plaza, stands the Renaissance cloth hall Sukiennice flanked by the Town Hall Tower.

The Road passes the Romanesque Church of St. Wojciech in the south-eastern corner of the square and leads down Grodzka Street along a number of historic landmarks and two smaller squares featured on both sides.

Halfway the Grodzka street turn right to Senacka street and then turn left and you will find yourself on the most spectacular Kanonicza street with its stately historic houses.

In the middle of Kanonicza street, a charming square opens to the white facade of the Jesuit august Baroque church of SS Peter and Paul’s of 1619 next to the majestic Romanesque church of St. Andrew’s of circa 1090.

From 1951 to 1963 Father Karol Wojtyla, future Pope John Paul II, lived at 19 and 21 Kanonicza Street (his former rooms have been turned into a part of the Archdiocese Museum, otherwise exhibiting church art).

Grodzka street ends at the foot of Wawel Hill with the Wawel Castle with an armory and the Cathedral.