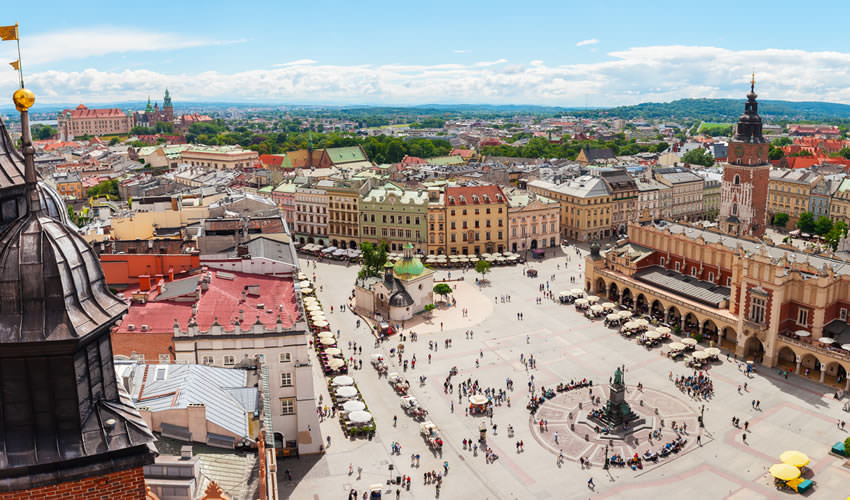 Krakow, the second largest city in Poland, delivers fairytale views, with the towering Wawel Castle, as well as people-watching meccas such as Florianska Street and the Market Square.

Dark times in the city’s recent history are evident in the Jewish ghetto memorial and Auschwitz-Birkenau concentration camp and green spaces such as Planty Park offer plenty of headspaces.

Get some inspiration with our guide to things to do in Krakow before planning a trip to this amazing city.

The buzzing heart of the Unesco-attested Krakow Old Town, the Market Square, is where all the action has played out since the Middle Ages.

Come here for bars packed into the cellars of Medieval buildings, on-street cafes and restaurants, and landmarks including the central renaissance Sukiennice, Cloth Hall, and Town Hall Tower (the hall itself was demolished in 1820).

You can’t visit Krakow without exploring the medley of gothic, renaissance, rococo, and romanesque architecture that is the great Wawel Castle. The muddle of buildings is at a high point in the city, giving it an imposing presence.

It was the home of the Polish kings and queens until the 1600s and has also been used as a barracks, a military hospital, and the official residence of the state governor following World War I.

The green belt Planty Park rings the whole area of Krakow’s historic Old Town. Pathways weave this way and that past sculptures, babbling fountains, and brick towers, while locals walk their dogs and cafes spill onto the surrounding streets.

It’s filled with life in the summer and a veritable winter wonderland during the colder months.

The Barbican is the only remaining gatehouse of the Medieval fortifications that once encircled the whole city.

Its redbrick bulwarks and formidable turrets helped to fend off the Mongol hordes during the 13th century and its circular design was on the cutting edge of engineering at the time. Today, occasional theatre productions and other art shows are hosted inside.

Pass through and listen to buskers play everything from highlander folk to Dylan-esque country in the echoing tunnel, before heading into the Old Town in the footsteps of the erstwhile Polish kings.

Built in the image of the prehistoric mounds of Krakus and Wanda, the soaring hill of Kościuszko was raised in 1823 to honor its namesake national hero, Tadeusz Kościuszko, who fought for Poland against the Russians and the Prussians in the 18th century.

From the top, travelers enjoy sweeping panoramas of the city, while clear days even reveal the Tatra Mountains to the south.

Cutting through the very heart of the northern half of the Old Town district, the bustling drag that is Florianska Street hosts craft beer bars, souvenir emporiums, and vodka-tasting joints.

You’ll need to be in the mood for ambling and taking in the atmosphere during the high season, as it’s often packed with tourists making their way from St Florian’s gate to the Market Square.

Hailed as the world’s oldest shopping center, the Sukiennice, or Cloth Hall, has stood in the middle of Krakow Market Square for centuries. It was once full of international traders, selling silk, spices, leather, and wax during its heyday in the 15th century – not just cloth.

Even if rummaging through souvenirs and food stands is not on your list of what to do in Krakow, pause outside to wonder at the handsome renaissance architecture.

The redbrick facade and great twin spires of St Mary’s Basilica have become symbols of the city.

The Basilica was founded in the 13th century but was destroyed during a Mongol invasion, and its various replacements have been through a lot, including an earthquake, which hit the presbytery in the 1400s. It still hosts the hourly bugle call – the Hejnał Mariacki.

Set within walking distance of the Old Town, the historic Jewish Quarter of Krakow was once a separate city in its own right, founded in the 15th century, and considered a model Jewish community.

Jews were forcibly moved to a ghetto shut off from the rest of the city in 1941. Today, it retains a unique vibe with its crumbling tenement blocks, great synagogues, and cool bohemian beer joints.

Touring a dragon’s den is one of the quirkier activities in Krakow.

Legend has it that the Smok Wawelski dragon used to live beneath the mound of Wawel Castle and terrorize the city’s residents, before coming to a grizzly end thanks to a shoemaker and a sheep stuffed with sulfur.

There is also a statue of the dragon that breathes real fire.

As the winding courses of the Vistula River snake through the heart of Krakow, its banks host wide spaces of greenery, ad hoc summertime markets, beer bars, and bobbing boat cafes.

Hire a bike or go jogging, stop and watch passing boats on the river, or stroll along as you decide what to see in Krakow next.

For hundreds of years, the miners of the Wieliczka tunnels fuelled Krakow’s growth, pulling tonnes of valuable rock salt from the earth below the city. Today, their gift continues in the form of sculptures carved in subterranean passages and St Kinga’s Chapel – an underground cathedral made of salt.

Dark, emotional, moving, and sobering in the extreme, there’s really nowhere in Europe quite like Auschwitz-Birkenau.

It remains one of the most important things to see in and near Krakow, offering an informative and sensitive insight into the horrors of the Holocaust and the destruction wrought by the Nazis on the Jews and other minority groups.

The memorial and museum are around an hour from the city center.

Hidden behind the old walls of Wawel Castle, arguably the most important church in Poland can be found looming high with its baroque and gothic frontispieces. There is so much to see, from the soaring lookouts of the belfry to the national crypts under the main basilica.

Packed to bursting with the graves and grand sepulchers of Polish artists, politicians, poets, film actors, generals, and more, the sprawling grounds of the Rakowicki Cemetery are Krakow’s answer to Paris’s Père Lachaise.

Head down on All Saints’ Day, November 1, to see thousands of twinkling candles in honor of the dead.

The bulbous stone peaks and forest-clad valleys of the Ojców National Park can be found just 20 minutes by car outside of Krakow.

Criss-crossed by walking trails and peppered with deep caves, they also boast allegedly haunted castle ruins and traditional country taverns. If you’re visiting Krakow for more than a long weekend, the park is a great choice for a day away from the city.

The great wedge of a green space that is the Błonia meadow sits on the western haunch of the city.

It’s not much to look at in the winter when it becomes caked in ice and snow, but summertime brings runners, dog walkers, roller-skaters, cyclists, and open-air music festivals.

Cut through by rattling tram lines and fringed with shops and cafes, this central square of the Podgórze district is home to one of the most sobering memorials in the city.

A series of large and small chairs have been placed in a grid across the cobbles, designed as a memorial to the people of the Jewish ghetto in Krakow, which was once located here.

There is also a plaque marking the meeting place of the Jewish Combat Organization, a resistance unit that staged acts of sabotage against the Nazis.

Hit the lively Unitarg on the weekends to experience a bona fide Polish flea market. Ramshackle stalls overladen with everything from band patches to age-stained metal tankards await. Haggle for everything, of course, and be sure to get in early for the best deals.