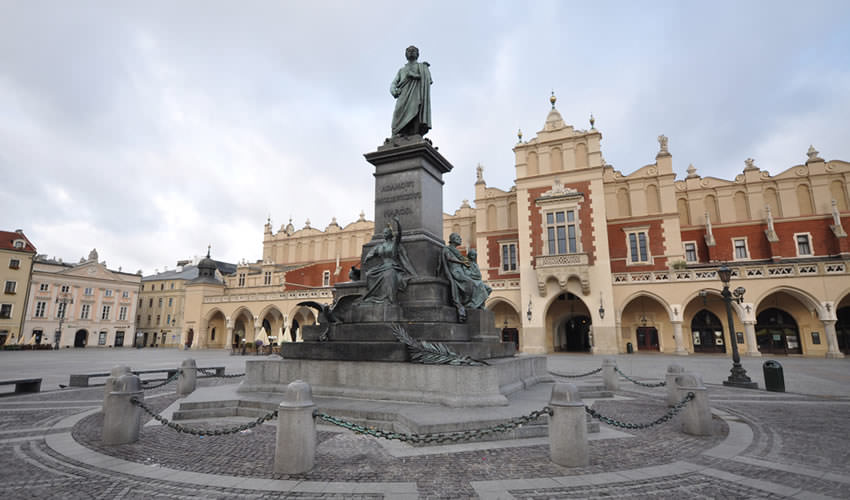 The Old Town district of Kraków is home to about six thousand historic sites and more than two million works of art.

Many renowned points of interest in the Old Town, drawing a constant stream of visitors, include galleries as well as departments of the National Museum in Kraków such as:

Historical Museum of Kraków with its departments: the Barbican, the House under the Cross housing History of Theatre museum, Hippolitow House, Town Hall Tower, Archdiocesan Museum, and Archeological Museum.

Two major theatres are also located there: the Old Theatre, and the most famous Juliusz Słowacki Theatre.

The extended list of Catholic churches in the Old Town includes:

The Old Town district has a profusion of bronze statues and marble monuments.

The most pronounced is the Monument of Adam Mickiewicz situated at the Main Marketplace between the St. Mary’s Church and the eastern side of Sukiennice. It was unveiled for the centenary of Adam Mickiewicz’s birth.

The poet is surrounded by four lower groups which symbolize:

The monument was designed by Teodor Rygier, cast in Rome, and ceremonially unveiled on 16 June 1898. It is a key part of the Market Square panorama and a place of meetings for many young people.

Other well-known monuments include the monument commemorating the poet Józef Bohdan Zaleski at Basztowa Street, showing a harpist with a guide boy, made in 1886 by Pius Welonski.

The Monument of Jagiello and Jadwiga at Planty Park was made by Tomas Oscar Sosnowski and raised in 1886 in celebration of the quincentenary of the Union between Poland and Lithuania.

The Monument of Lilia Weneda at Planty Park, erected to commemorate poet Juliusz Słowacki showing a character from the poet’s drama playing the harp, was made by Alfred Daun in 1884.

Across from the Palace of Art stands the Monument of Artur Grottger made by Wacław Szymanowski in 1901. Monument of Piotr Skrzynecki is in front of the Vis-á-vis café on the Main Market Square.

The monument of Jozef Dietl on All Saints’ Square was made by Ksawery Dunikowski in 1938 and erected in honor of the first president of Kraków.

The monument to Aleksander Fredro is featured in front of the Juliusz Słowacki Theatre, near Planty Park. It was made by Professor Cyprian Godebski in 1900.

Along Planty – near the Collegium Novum – is the monument to astronomer Nicolaus Copernicus depicting him as an established scholar. It was made by Godebski in 1900.

Grażyna Monument at Planty Park presents characters from Adam Mickiewicz’s poem entitled “Grażyna” (Grażyna and Litawor). It was made by Alfred Daun in 1884.

The monument of Florian Straszewski also at Planty Park is an obelisk erected in honor of the co-originator of the Park and made by Edward Stehlik in 1874.

The bust of comedy writer Michał Bałucki made by Tadeusz Błotnicki in 1911 is located behind the Juliusz Słowacki Theatre. The Soviet Soldiers’ Graveyard monument situated near the Barbican till 1997 was later moved to Rakowicki Cemetery.

Monument to Unknown Soldiers who fell during Kraków’s liberation in 1945 was made by Karol Muszkiet and Marcin Bukowski in 1945.

A sculpture entitled “Polonia” near the Church of Franciscans presents the mother, holding a baby in her arms, with a weasel and two dogs. It was made by Genowefa Nowak in 1968.

The monument of Tadeusz Boy-Żeleński, a friend of Stanisław Wyspiański, stands near the exit from Poselska Street. It was made by Edward Krzak in 1980. The monument of Cardinal Adam Stefan Sapieha stands in front of the Church of St. Franciscans.

It was made from August Zamoyski’s 1976 design.

The monument of Tadeusz Kościuszko sculptured by Leonardo Marconi and Antoni Popiel is featured at Wawel. It was cast in bronze in 1900 and erected around 1920 by the newly established Tadeusz Kościuszko Society to celebrate the return of Poland’s independence.

The new sculpture “Eros Bendato” made by Igor Mitoraj is situated on the Main Market Square, near the Town Hall Tower.

Among the best-known places to visit in and around the Old Town is the Wierzynek restaurant at the Main Market Square. Its name refers to townsman Mikołaj Wierzynek and a feast held by him in the 14th century.

The artistic café, Jama Michalika, boasts over a hundred years of literary traditions. Here the Zielony Balonik Cabaret has come into being and the Spirit of Young Poland has arisen.

At the Main Market Square, there is also the Piwnica pod Baranami cabaret, created by renowned local artists, and a students’ club Pod Jaszczurami. The club is a legend in academic cultural circles.

It is a popular place of meetings for the academic environment of Kraków where visitors are always welcome.

Moreover, the Square in the city center is a place where many famous people and many important events were and are commemorated.

There are plaques dedicated to the oath of Tadeusz Kościuszko in 1794, to Prussian Homage in 1525, and to supporting the renovation of Main Market Square from 1964.