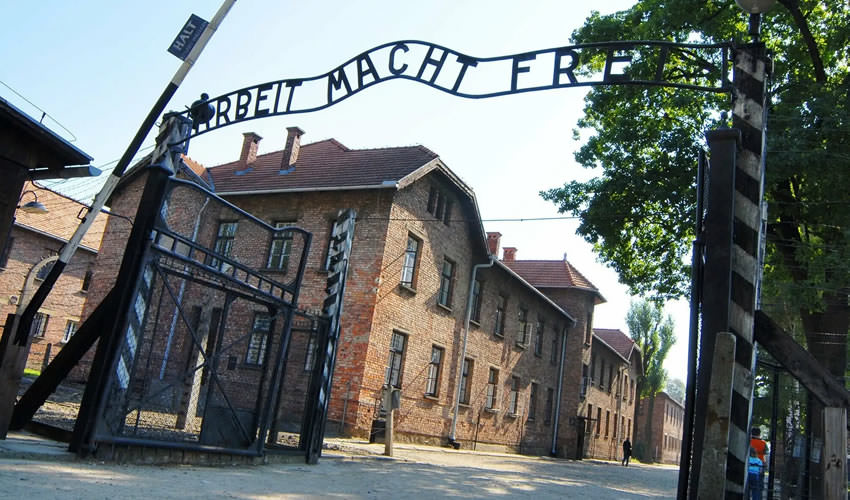 Auschwitz is a former concentration camp known worldwide as a symbol of the Holocaust.

During World War II, Auschwitz-Birkenau was the largest concentration camp of the Nazis.

The Nazis established killing centers in German-occupied Europe during World War II. They built these killing centers exclusively or primarily for the mass murder of human beings. Nazi officials employed assembly-line methods of murder in these facilities.

The Auschwitz concentration camp complex, which was the largest of its kind, was instrumental in carrying out the Nazi plan for the “final solution.” Auschwitz left its mark as one of the most infamous camps of the Holocaust.

Auschwitz was located in German-occupied Poland and consisted of three camps, including a killing center. The camps opened over the course of almost two years, between 1940 and 1942.

The Auschwitz complex is often mistakenly referred to as “Auschwitz-Birkenau”. Birkenau, or Auschwitz II, is just one section of the entire complex. The killing center, Birkenau, is where the gas chambers were located.

It was established in the suburbs of Oswiecim (Auschwitz in German), 60 km west of Krakow. It took the lives of about 1.1 million people, mostly Jewish but also Poles, Romani, and Russian.

Nazi officials deployed the first killing centers at T4 (“euthanasia”) facilities to murder institutionalized persons with disabilities between 1940 and 1941.

Chelmno, the first killing center for the mass murder of Jews, was established in December 1941. In 1942, Belzec, Sobibor, and Treblinka were established as a part of Operation Reinhard with the goal of murdering all the Jews of the General Government.

More than 1.1 million people were killed in the Auschwitz-Birkenau labor camp and killing center. Of those, nearly one million were Jews. Those Jews who were not sent directly to the gas chambers were deployed in forced labor.

The liberation of the Auschwitz-Birkenau concentration camp took place in January 1945.

Auschwitz closed in January 1945, when it was liberated by the Soviet Army.

However, before that Nazi authorities tried to destroy as much evidence of massive murders as possible.

After the war, the Polish government decided to restore Auschwitz-Birkenau and turn it into a museum.

The journey takes about 1 hour and 10 mins each way.

Auschwitz-Birkenau guided tour with a professional guide takes about 3.5 hours: