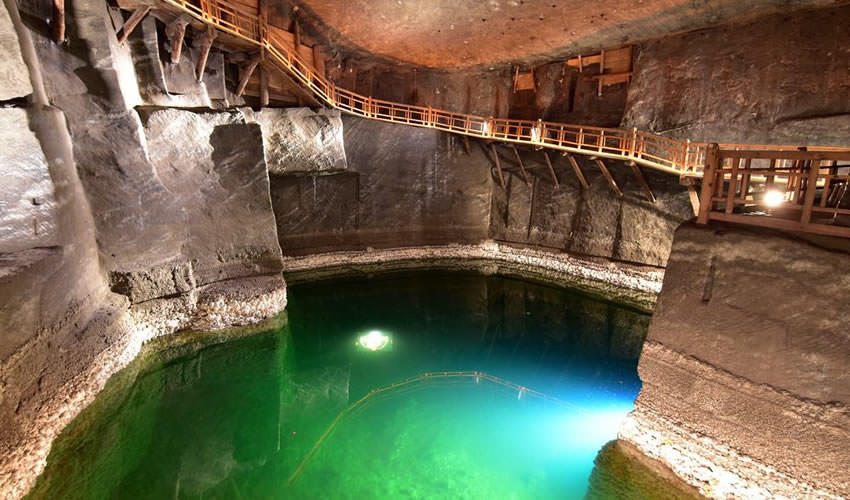 Wieliczka Salt Mine is an extraordinary place – hidden from the world, full of secrets and legends.

For hundreds of years, the miners of the Wieliczka tunnels fuelled Krakow’s growth, pulling tonnes of valuable rock salt from the earth below the city. Today, their gift continues in the form of sculptures carved in subterranean passages and St Kinga’s Chapel – an underground cathedral made of salt.

The picturesque underground landscapes owe their beauty to nature, which sculpted the rocks in unusual, varied, and complicated forms. Did you know that the Wieliczka Salt Mine has a unique geological structure, not found anywhere else in the world?

History of the Wieliczka Salt Mines

Brine (salt water drawn from springs) used to be boiled in clay vessels on hearths. This way, salt was obtained already in the Neolithic times. The oldest salt-working tools in Central Europe, discovered in the village of Barycz, near Wieliczka, come from this period.

The history of Wieliczka dates back to the Middle Ages when it was proudly named the Magnum Sal – the Great Salt. In the 13th century, it was known as the largest source of salt in Poland, and over the years it became crucial for the country’s economy.

Deep underground, there is a salt labyrinth! If you don’t know the way, you could easily get lost forever… The underground is measured and described by creating underground maps so you can always find the way in this endless maze of drifts, crosscuts, and ramps.

The breathtaking Crystal Grottoes are a priceless natural object of the “Wieliczka” Salt Mine deposit, unique on a global scale. It is at the same time a fairy tale and an extremely fragile place.

Chambers – spaces hollowed out in the salt rock

Deep underground, you can admire the unusual salt landscapes, the impressive size of the workings, salt rocks of various kinds, salt lakes, and works of art created by sculptor miners…

There are more than 2,000 chambers in the Mine, but you won’t find two identical ones!

Every day, several hundred miners work hard underground and on the surface to ensure that the huge salt labyrinth survives the centuries to come and continues to enthrall visitors from all over the world.

New attractions for visitors are also constantly being created.

It is said that fresh water is the source of life. That’s true, but… not in the underground spaces of the Mine. In the land of salt, fresh water is a dangerous element and a powerful force that must be constantly controlled. Directing water to the saltworks is one way.

Look up! There are trousers, shirts, and shoes hanging high up under the ceiling. Miners’ clothes are hung on chains, the chains are attached to hooks, and all of this is six meters above the ground.

Do you know what this place is? Yes, it’s a mining locker room!

Deep underground, in corridors where tourists do not wander, the whole mine is shrouded in darkness. Miners wander through dark corridors, illuminating their way with the light of lamps. Where do they get the lamps from?

From the lamp room, of course. This is where they are stored, repaired, and maintained!