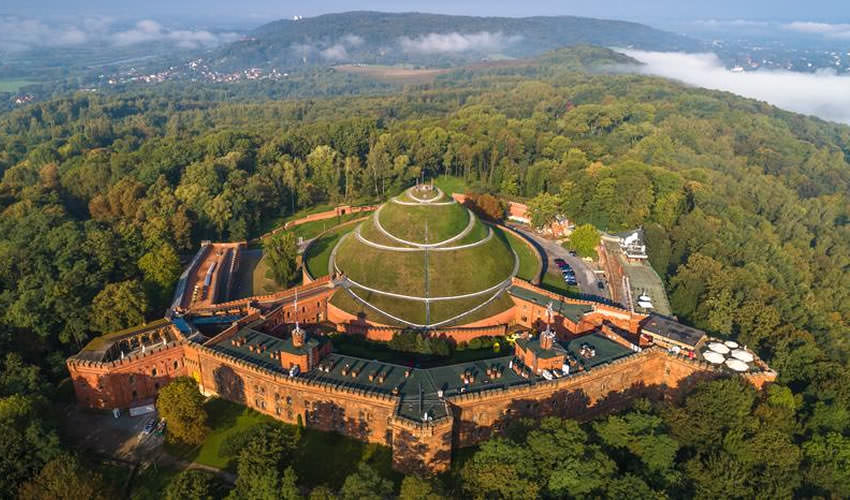 Kościuszko Mound (Kopiec Kościuszki) is an artificial mound in Kraków, Poland. It was erected by Cracovians in commemoration of the Polish national leader Tadeusz Kościuszko, and modeled after Kraków’s prehistoric mounds of Krak and Wanda.

A serpentine path leads to the top, approximately 326 meters above sea level, with a panoramic view of the Vistula River and Krakow, while clear days even reveal the Tatra Mountains to the south.

It was completed in November 1823. The location selected for the monument was the natural Blessed Bronisława Hill (Wzgórze bł. Bronisławy), also known as Sikornik, situated in the western part of Kraków’s Zwierzyniec District.

The founding ceremony of the Kościuszko Mound took place on 16 October 1820. The construction was financed by donations from Poles living in all territories of Poland under foreign occupation.

For three years, people of all ages and classes voluntarily constructed the mound to a height of 34 meters.

Work was supervised by a Committee for the Construction of the Tadeusz Kościuszko Monument. At the base of the mound, the Founding Act was deposited in a glass and marble case.

At the top, a granite boulder, brought from the Tatra Mountains, was placed, bearing the inscription “Kościuszce” (To Kościuszko).

Inside the mound, urns were buried with soil from the Polish and American battlefields where Kościuszko fought.

In 1860, on the 30th anniversary of the Polish November Uprising, the top of the mound was crowned with a boulder (545 kg) of granite from the Tatra mountains which had engraved upon it: TO KOŚCIUSZKO.

Initially, the grounds around Kościuszko Mound were planned to be turned into a colony settlement for the peasant families that fought alongside Tadeusz Kościuszko in the uprising of 1794.

In the late 1830s, those families began to settle at the foothills of Kościuszko Mound, but the process came to a halt when Austrian authorities decided to turn this area into a part of the city’s fortification.

Between 1850 and 1854, the Austrian authorities built a brick citadel around the mound and began using it as a strategic lookout.

As compensation for an earlier historical church that had been demolished, a neo-Gothic chapel of Blessed Bronisława was also built.

However, the Austrian fortifications, including the gateway and the southwestern rampart and entrenchment were eventually dismantled following World War II, between 1945 and 1956.

Next to the mound, there is a museum devoted to Kościuszko, that displays artifacts and mementos of his life and achievements.

In 1997, heavy rains eroded the mound, thus threatening its existence. It went through a restoration process from 1999 to 2003 in which state-of-the-art technology and modern materials were used.

The mound was equipped with a drainage system and a new waterproofing membrane.

The mound in numbers