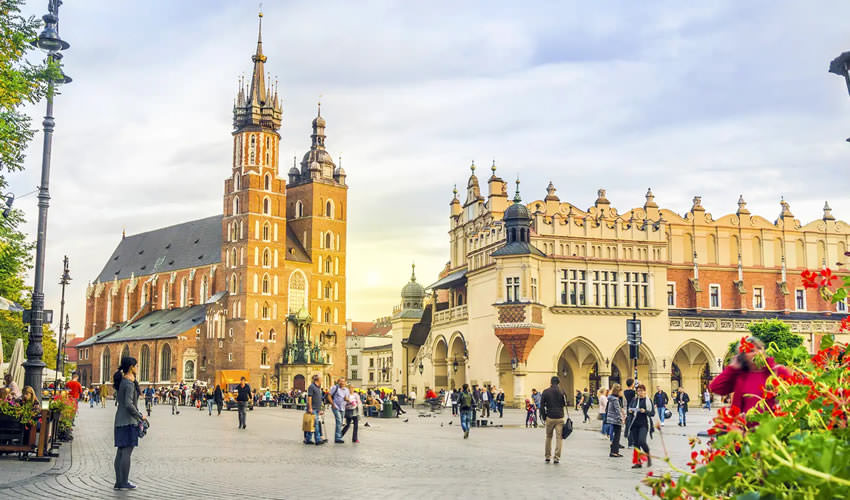 What is Krakow most famous for?

Krakow is like a scene from a medieval fairy tale, a historical city bursting with color, culture, and curiosity.

Whether you’re looking for a romantic weekend away, a fun getaway with friends or you’re keen to learn about its significant history and the impact of World War II on the city, Krakow covers all grounds.

What are the best things to do in Krakow?

There’s something quite welcoming about Poland’s coolest city. It’s cheap, it’s beautiful and there are so many unique and incredible sights and attractions to discover. Who knew you could text a fire-breathing dragon?

So, here are some of the top things to do in Krakow in a day.

Rynek Główny is the heart of the city

One of the largest squares in medieval Europe, Krakow’s 4-hectare Main Market Square is the center of the city around which everything else gravitates. The square’s Adam Mickiewicz Monument is the go-to meeting place for visitors and locals alike and is the ideal spot to begin your explorations.

Much like the rest of the city, the Main Market Square is steeped in history and boasts intricate ancient architecture, from elegant townhouses with unique names to the 14th-century Gothic St. Mary’s Basilica and the 16th-century Renaissance Cloth Hall.

Be sure to explore inside the famous Cloth Hall as it’s one of the first shopping malls in the world and houses the Rynek Underground hi-tech museum.

A traditional way to see the city

Hop on a horse and cart from the Main Market Square for a fun and unique way to see Krakow’s Old Town.

You can’t miss the line of horse-drawn carriages, waiting for you to climb aboard for a unique tour of the city. Considering it’s so surprisingly cheap, you’ll feel like royalty as you’re chauffeured through the cobbled streets and up toward Wawel Castle.

Krakow’s Old Town has earnt itself UNESCO World Heritage status, and your driver and guide will show you all the key points of interest and tell you all about the area’s history.

The Old Town’s fairy-tale architecture all around you just adds to the magical experience.

One of the dominating features of the Old Town’s Main Market Square, St. Mary’s Basilica is just as impressive on the inside as it is on the outside. From the outside, you’re drawn to its looming brick structure, with its asymmetrical twin towers.

The taller of the 2 displays a bright golden crown on top of its Gothic spire.

Step inside the church doors and you’re treated to an explosion of color.

From the breathtaking kaleidoscope of 14th-century stained-glass windows illuminating the altar, to the brightly colored wall paintings and the mesmerizing deep-blue ceiling, twinkling with golden stars, it’s worth every bit of time to explore.

Visit on the hour to hear the famous bugle call sound from the top of the tallest tower.

What was once Oskar Schindler’s working enamel factory has now become a fascinating interactive museum in Krakow’s bleak industrial district. Schindler, the Nazi industrialist, became famous for saving the lives of 1,200 Jews by employing them to work in his factories during the Holocaust.

Nowadays, the Schindler’s Factory museum is devoted to his story and the history of Krakow during the World War II Nazi occupation. There are often temporary exhibitions taking place in the museum, but the permanent one is worth the visit on its own.

Walk the recreated Krakow wartime street and see Schindler’s office, preserved just how he left it, complete with his desk and a huge map of Europe.

Auschwitz stands as a poignant and stark reminder of the dire conditions Jews faced during the Holocaust of World War II.

A journey to this infamous extermination camp is sobering and emotional, but altogether unmissable. It was the largest of the Nazi concentration camps and now serves as a moving memorial to the 1 million Jews who lost their lives there.

It’s possible to catch a bus from the center of Krakow to Auschwitz, but it can be a little challenging to get to.

So, to get the most out of the experience, it’s advisable to book an excursion, which includes travel to and from Krakow, and a fully-guided tour of the concentration camp, prison blocks, and gas chambers.

Climb Wawel Hill and experience the imposing Wawel Castle with its dramatic fairy-tale spires; the most famous attraction in Krakow. It’s not just iconic to the city, but it’s a symbol of Poland’s national identity, too.

Visible from nearly every corner of Krakow, you’ll get superb views from the top as you wander the castle grounds.

Now a museum, the castle consists of 5 separate sections (each requiring separate tickets): The State Rooms, the Royal Private Apartments, Lost Wawel, the Crown Treasury & Armoury, and the Exhibition of Oriental Art.

Make sure you time your visit well, as you’ll want at least a couple of hours to look around everywhere and you may experience some queues while waiting to get in.

Head just outside the grounds of Wawel Castle and witness the fierce Wawel Dragon breathe real fire before your eyes. Legend has it that the mythical creature once dwelt in a cave beneath the castle, wreaking havoc with city dwellers during King Krakus’ reign.

That was until Skuba, the poor shoemaker, stuffed a sheepskin with sulfur and tricked the dragon into eating it. It caused the beast to become so thirsty that it drank from the Vistula River until it exploded.

Nowadays, the 6-meter-tall and 7-headed Wawel Dragon statue – named Smok Wawelski – can be found by the banks of the Vistula River. It shoots flames from its mouth every 5 minutes, but you can also text “SMOK” to 7168 to summons the flames yourself.

An underground maze filled with ornate statues and elaborate chandeliers, the Wieliczka Salt Mine has to be seen to be believed. Now a protected UNESCO World Heritage Site, the former mine features 300 km of tunnels and chambers spread over 9 levels, the deepest of which is 327 meters below ground level.

Make the 14 km journey from Krakow city center and experience the wonder of one of Poland’s most popular attractions for yourself on a 2-hour guided tour. See the impressive Chapel of St. Kinga built entirely from salt, the dense waters of the salt lake, and the 36-meter-high Stanislaw Staszic Chamber.

Your ticket also includes a 1-hour tour of the Krakow Saltworks Museum.

After an action-packed day exploring the city, there’s no better place to soak up the atmosphere and enjoy a drink or 2 than in Krakow’s popular Kazimieriz neighborhood.

The lively Jewish quarter is as bursting with history and synagogues as it is with boutique shops, unique galleries, colorful street art, and bustling bars and cocktail dens.

This thriving part of the city oozes character and provides the perfect setting to sample some traditional Polish wódka with the locals. If you feel wobbly at the thought of neat shots of vodka, then try a refreshing Zubrowka bison grass vodka and apple juice instead.