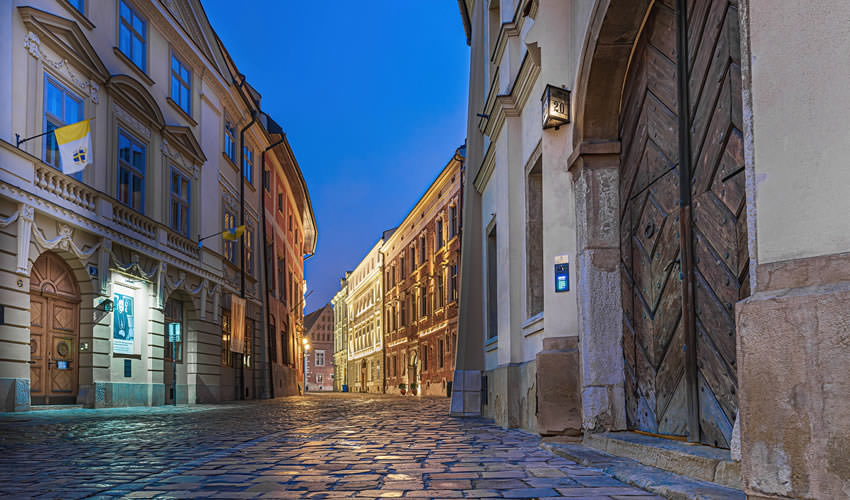 Formerly, the buildings along the street housed Cathedral canons (priests managing the Cathedral), and to this day many of their Baroque and Renaissance have remained present.

The southern end of the street was closed off with the Poboczna Gate, demolished during the urban modernization of Kraków.

Kanonicza Street 1 – Samuel Maciejowski Palace – built in the first half of the sixteenth century and until the eighteenth century served as a canon’s residence, also known as the Chapel of St. George.

Presently, the palace houses the Faculty of Architecture of the Tadeusz Kościuszko University of Technology.

Kanonicza Street 2 – Angel’s House – a historic townhouse from the sixteenth century. Presently, the house serves as a private residence.

Kanonicza Street 6 – Knight’s House – a Gothic building, formerly serving as a residence for knights. Since 1980, the building housed the Kraków Society of Friends of Fine Arts, while presently part of the Jagiellonian University.

Kanonicza Street 18 – Florian Mokrski Palace – built in the fourteen-century. The palace was built as a residence for Florian Mokrski, a Bishop of Kraków. It became the seat of Pope John Paul II Centre “Do not be afraid” (“Nie lękajcie się”).

Kanonicza Street 25 – Długosz House – the former residence of a cathedral canon. The building has been named by one of its later occupants, inter alia historian and diplomat Jan Długosz.

Presently, the building houses the rectorate of the Pontifical University of John Paul II.