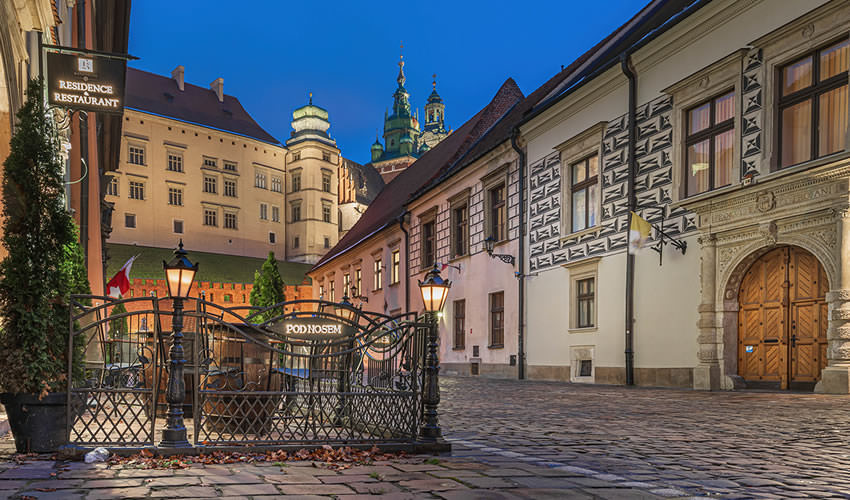 Kraków Old Town is the historic central district of Kraków, Poland. It is one of the most famous old districts in Poland today and was the center of Poland’s political life from 1038 until King Sigismund III Vasa relocated his court to Warsaw in 1596.

The entire medieval Old Town is among the first sites chosen for UNESCO’s original World Heritage List, inscribed as Cracow’s Historic Centre. The Old Town is also one of Poland’s official national Historic Monuments (Pomnik historii) chosen in the first round, as designated on 16 September 1994, and tracked by the National Heritage Board of Poland.

The Old Town is known in Polish as Stare Miasto. It is part of the city’s first administrative district which is also named “Stare Miasto”, although it covers a wider area than the Old Town itself.

Medieval Kraków was surrounded by a 3 km defensive wall complete with 46 towers and seven main entrances leading through them. The fortifications around the Old Town were erected over the course of two centuries.

The current architectural plan of Stare Miasto – the 13th-century merchants’ town – was drawn up in 1257 after the destruction of the city during the Tatar invasions of 1241 followed by raids of 1259 and repelled in 1287.

The district features the centrally located Rynek Główny, or Main Square, the largest medieval town square of any European city.

There is a number of historic landmarks in its vicinity, such as St. Mary’s Basilica (Kościół Mariacki), Church of St. Wojciech (St. Adalbert’s), Church of St. Barbara, as well as other national treasures.

At the center of the plaza, surrounded by kamienice (row houses) and noble residences, stands the Renaissance cloth hall Sukiennice (currently housing gift shops, restaurants, and merchant stalls) with the National Gallery of Art upstairs.

It is flanked by the Town Hall Tower (Wieża Ratuszowa).

The whole district is bisected by the Royal Road, the coronation route traversed by the Kings of Poland.

The Route begins at St. Florian’s Church outside the northern flank of the old city walls in the medieval suburb of Kleparz; passes the Barbican of Kraków (Barbakan) built in 1499, and enters Stare Miasto through the Florian Gate. It leads down Floriańska Street through the Main Square, and up Grodzka to Wawel, the former seat of Polish royalty overlooking the Vistula river.

In the 19th century, most of the Old Town fortifications were demolished. The moat encircling the walls was filled in and turned into a green belt known as Planty Park.

Today the Old Town attracts visitors from all over the world.

The historic center is one of 14 places in Poland that are included in the UNESCO World Heritage Sites. The architectural design of the Old Town has survived many cataclysms of the past and has retained the original form that was established in medieval times.

Throughout the year the Old Town is lively and crowded. There are many tourists, indefatigable florists, and lined up horse-drawn carriages waiting to give a ride.

The place is always vibrant with life especially in and around the Main Market Square, one of the biggest squares in Europe, which came into existence when the city was given Magdeburg Rights in 1257.

Tourist attractions such as the Town Hall Tower, the Sukiennice (also known as the Cloth Hall), old tenements with fine shops, and Adam Mickiewicz Monument are all located there.

While near the monument, one can listen to the heynal, which is played each hour from the highest tower of St. Mary’s Church.

There are many cafes, pubs, and clubs, which are located in medieval basements and cellars with vaulted ceilings. The most famous places include “Wierzynek” Restaurant and Club “Pod Jaszczurami”.

Numerous events, concerts, and exhibitions are organized there.

Obwarzanki Krakowskie, or twisted ring-shaped bread, is undoubtedly a symbol of Kraków. On the Square, there is an obwarzanki seller every few steps. Traditional obwarzanki are sprinkled with poppy seeds.

Today, sellers offer a whole variety of them; apart from poppy seeds, there are also sesame seeds, rock salt, and even pizza sprinkles.

One can eat them while strolling or in a horse-drawn carriage while cruising around and glancing at yet another symbol of the old city, namely Kraków pigeons. One can also come across various buskers and mimes.

Numerous legends purport to explain the presence of numerous pigeons on the Main Square.

According to one legend, Henry IV Probus, who tried to take over the Senioral Province during the period of regional disintegration of Poland, attempted to go to Rome with financial offerings in order to gain papal approval for his coronation.

However, a certain enchantress turned his knights into pigeons. They pecked out some pebbles from the walls of St. Mary’s Church, which then turned into gold.

With these riches the prince set off to the Vatican, but while on his way he lost everything and never managed to reach his destination. He returned to Kraków. None of his knights ever regained a human form.