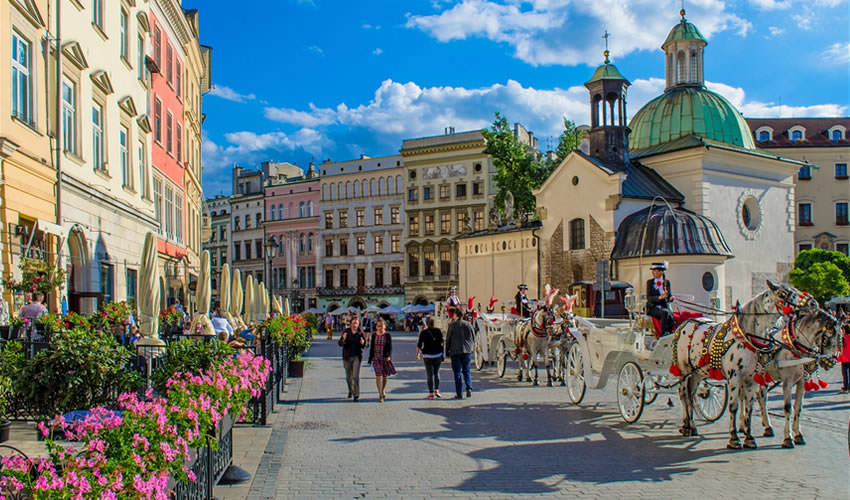 Krakow is a charming, unusually attractive, ancient city, located on the Vistula River in a valley in front of the Carpathian plateau. The Old Town of Krakow is the epitome of Polish culture, the coronation site of Polish monarchs, and a UNESCO World Heritage Site.

Krakow is over 1000 years old! The first mention of it dates back to 965 by Arab merchants in the chronicles of visiting these places. Krakow is especially attractive for its Old Town, which was the capital of the Kingdom of Poland from 1038 to 1596.

You should start your tour from the Old Town. It is located in its very center, in the Stare Miasto area. Here you can walk for a very long time, examining the many buildings in the Baroque, Gothic, and Renaissance styles.

Old Krakow is a pedestrian zone. In this small area, there are many attractions connected by the tourist route so-called the “Royal Road”. Previously, royal guests used this route.

The center of the Old Town is the Market Square, which has been preserved in almost its original form and is one of the largest in Europe. Palaces and churches are located on the Main Market Square. Walking here, you can feel the spirit of those times.

Cloth Hall and the National Museum of Krakow

In the center of the square is the building of Cloth Rows with wonderful arches. Previously, the cloth was sold on these premises, and now there are fairs where you can buy silver and amber products.

On the second floor, there is the National Museum of Krakow, the exposition of which contains the famous painting by Leonardo da Vinci “Lady with an Ermine”.

Immediately behind Cloth Hall stands the City Hall Tower. Once upon a time, the Krakow treasury was located here, and the Dorotka prison was in the cellars. From the observation deck of the tower, a beautiful delightful panorama of the city opens.

Further, the “Royal Road” will certainly lead you to St. Mary’s Church, which was built in the Gothic style. The church is famous for its crucifix and altar, which were made by the famous German sculptor Wit Stwosz.

The altar is one of the largest in Medieval Europe. The coronation of the Virgin Mary by the Holy Trinity is depicted in the center, and moments from the life of the Virgin are depicted around.

The first mention of it dates back to 1307. The height of the tower is 34.5 meters. On one side is the coat of arms of the Polish state – a white eagle, and on the other – the figure of St. Florian, the patron saint of Poland.

Inside the tower, there is an ancient icon and the chapel of St. Florian.

The Church of the Martyr Florian is made in the Gothic style. The architectural appearance of the temple is very unusual. In the center is a sculpture of St. Florian, and on the altar, there is a masterpiece of world culture – the image of St. Florian.

Then you can visit the Barbican. This is the name of any fortification designed to protect the entrance to the fortress. Wherever you go in Old Town in Krakow, you will return to the Barbican every time.

The building was erected during the reign of Jan I Olbrecht at the end of the 14th century. Now the Barbican houses a branch of the Krakow Historical Museum, which often hosts exhibitions and reconstructions of Polish balls.

Every year, many tourists come to see the power of the Krakow Barbican and watch costumed theatrical performances and exhibitions.

Another interesting attraction of the Royal Road is the Academy of Fine Arts, the oldest educational institution in Krakow, founded in 1818. The famous painter Jan Matejko was the first director.

Not far from the academy is the House with Columns. It was built in 1889, but even then it had its own plumbing, elevator, and lighting. And now the District Railway Administration is located here.

“All roads lead to Rome”, and the Royal Road leads to the Wawel Castle, shrouded in legends and mysticism. It is the most beautiful palace in Poland and a symbol of the country. The castle is located on the highest bank of the Vistula River.

On the territory of the palace, there is a beautiful garden with an observation deck. There are also museums where you can see the royal chambers, the treasury, and the armory.

Cathedral of St. Stanislaus and Wenceslas

Nearby is the Cathedral of Saints Stanislaus and Wenceslas, which was the place of the coronation of Polish rulers and their tomb. The attention of tourists is attracted by mammoth bones hanging at the entrance to the cathedral.

There is a legend that the bones bring prosperity and peace to the land on which they are located.

Children will be interested in the Dragon Cave in limestone rock. The legend says that a terrible dragon lived here, demanding the most beautiful girls as a sacrifice. One of the sons of King Krak, the founder of the city was able to defeat the dragon.

However, there is another version, which says that a simple shoemaker killed the dragon, and then married a princess and received half a principality.

At the entrance to the cave is a sculpture of a dragon spewing fire from its mouth.

If the Royal Road clockwise leads us from the Wawel Castle to the Barbican, then if you go around the castle counterclockwise, you will get to the Krakow Planty park.

This is an unusually beautiful park with a length of 4 km in the form of a semicircle that goes around the Old Town. The park was created on the site of defensive structures, work went on from 1822 to 1830.

Krakow Planty is not only a park, but it also has a lot of sights of interest: the Church of St. Anne, the Collegium Maius, the monument to N. Copernicus, the Barefoot Carmelite Monastery, the Theological Seminary.

Walking along the Krakow Planty, it is impossible to pass by the Collegium Maius, which is included in the list of the main historical sights of the city. This is the oldest building of the famous Jagiellonian University founded in 1364.

The Gothic architecture of the building itself, the courtyard with a covered arch attracts travelers.

Now there is a university museum, the expositions of which acquaint us with the history of the university. One of the valuable exhibits is a set of astrological instruments that Copernicus used while working on the book “On the rotation of the celestial spheres”.

The historical facts of the building itself are fascinating. In 1400, King Vladislav Jagiello purchased this building for 600 hryvnias (the name of the currency of that time) for the Jagiellonian University.

This amount was part of the dowry of Queen Jadwiga, who at the end of her life sold all her jewelry and directed the proceeds to the development of the institution.

Church of St.Peter and Paul

While in the Old City, visit the Church of Saints Peter and Paul. The first baroque building in Krakow. The temple was established by Sigismund III for the Jesuit order.

The plan was designed by the Italian architect Giovanni de Rossi and implemented before 1597 by Giovanni Bernardoni.

Since 1822, the parish of All Saints has been operating in the temple. The facade of the temple is crowned with the coat of arms of its founder, King Sigismund III (an image of an eagle with a sheaf on his chest).

Krakow is a city of mood and inspiration. No matter what time of the year you come, he always welcomes tourists.