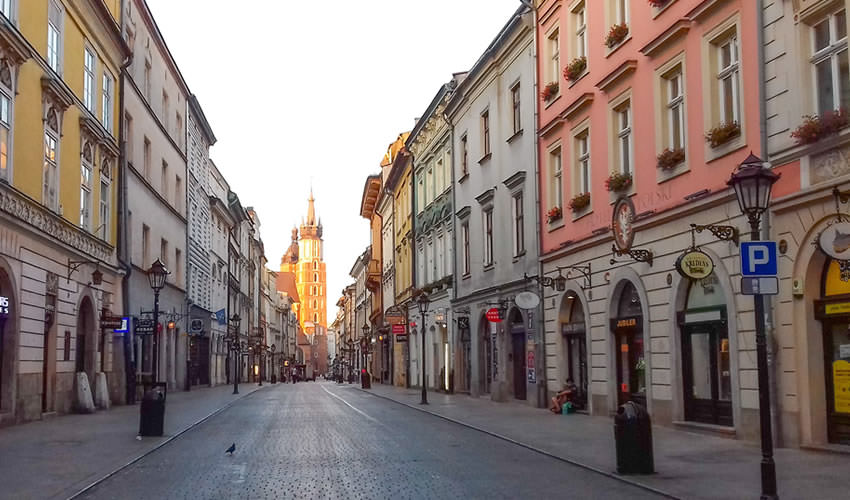 Floriańska Street or St. Florian’s Street is one of the main streets in Kraków Old Town and one of the most famous promenades in the city.

Cutting through the very heart of the northern half of the Old Town district, the bustling drag that is Florianska Street hosts craft beer bars, souvenir emporiums, and vodka-tasting joints.

You’ll need to be in the mood for ambling and taking in the atmosphere during the high season, as it’s often packed with tourists making their way from St Florian’s gate to the Market Square.

The street forms part of the regular grid plan of the Old Town, the merchants’ town that extends the medieval heart of the city, which was drawn up in 1257 after the destruction of the city during the first Mongol invasion of Poland in 1241.

Floriańska appears on the 1257 plan of the extended city. It marks the beginning of the Royal Road in Kraków and stretches from the north-western end of the main square, Rynek Główny, to the landmark St. Florian’s Gate, a distance of 335 meters.

In 1882, the first horse tram line started. In 1901 it was transformed into the electricity line (now defunct).

A number of notable landmarks and monuments, mainly kamienica-style buildings, are located on the street. The north-western end of the street passes through St. Florian’s Gate.

Today, the street is a major tourist attraction, and most buildings feature shops, restaurants, cafes, and similar establishments.

In 2007, the Polish magazine Wprost ranked Floriańska Street as the third most prestigious street in Poland, and the most prestigious in Kraków, following Warsaw’s Nowy Świat (New World Street) and Krakowskie Przedmieście Street.

In 2011 and 2013, rents at Floriańska Street were the second highest in Poland, second only to that for Nowy Świat Street.