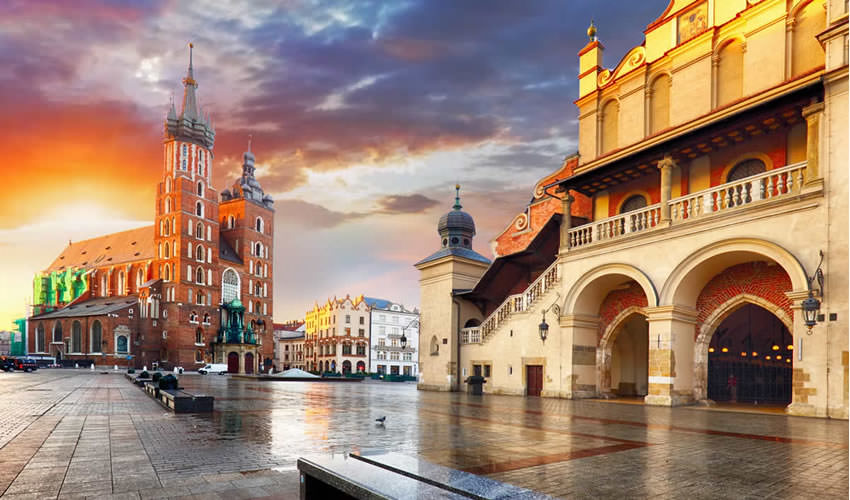 Developed over many centuries, Kraków provides a showcase setting for many historic styles of architecture.

As the city expanded, so too did the architectural achievements of its builders. It is for this reason that the variations in style and urban planning are so easily recognizable.

Built from its earliest nucleus outward, and having escaped much of the destruction endured by Poland during the 20th-century wars, Kraków’s many architectural monuments can typically be seen in historical order by walking from the city center out, towards its later districts. Kraków is one of the few medieval towns in Poland that does not have a historic Ratusz town hall in its Main Square because it has not survived the Partitions of Poland.

Kraków’s historic center, which includes the Old Town, Kazimierz, and the Wawel Castle, was included as the first of its kind on the list of UNESCO World Heritage Sites in 1978.

The Stare Miasto is the most prominent example of an old town in the country.

For many centuries Kraków was the royal capital of Poland until Sigismund III Vasa relocated the court to Warsaw in 1596. The whole district is bisected by the Royal Road, the coronation route traversed by the Kings of Poland.

The Route begins at St. Florian’s Church outside the northern flank of the old city walls in the medieval suburb of Kleparz; passes the Barbican of Kraków (Barbakan) built in 1499, and enters Stare Miasto through the Florian Gate.

It leads down Floriańska Street through the Main Square, and up Grodzka to Wawel, the former seat of Polish royalty, overlooking the Vistula river. Old Town attracts visitors from all over the World. Kraków historic center is one of the 13 places in Poland that are included in the UNESCO World Heritage Sites.

The architectural design of the district had survived all cataclysms of the past and retained its original form coming from medieval times.

In addition to the old town, the city’s district of Kazimierz is particularly notable for its many renaissance buildings and picturesque streets, as well as the historic Jewish quarter located in the northeastern part of Kazimierz. Kazimierz was founded in the 14th century to the southeast of the city center and soon became a wealthy, well-populated area where the construction of imposing properties became commonplace. Perhaps the most important feature of medieval Kazimierz was the only major, permanent bridge (Pons Regalis) across the northern arm of the Vistula.

This natural barrier was used to separate Kazimierz from the Old Town for several centuries, while the bridge connected Kraków to the Wieliczka Salt Mine and the lucrative Hungarian trade route.

The last structure at this location (at the end of modern Stradom Street) was dismantled in 1880 when the northern arm of the river was filled in with earth and rock and subsequently built over.

By the 1930s, Kraków had 120 officially registered synagogues and prayer houses that spanned across the old city. Much of Jewish intellectual life had moved to new centers like Podgórze.

This, in turn, led to the redevelopment and renovation of much of Kazimierz and the development of new districts in Kraków. Most historic buildings in central Kazimierz today are preserved in their original form.

Some old buildings, however, were not repaired after the devastation brought by the Second World War, and have remained empty.

As the city of Kraków began to expand further under the rule of the Austro-Hungarian Empire, new architectural styles also developed.

Key buildings from the 19th and early 20th centuries in Kraków include the Jan Matejko Academy of Fine Arts, the directorate of the Polish State Railways as well as the original complex of Kraków Główny railway station and the city’s Academy of Economics.

It was also at around that time that Kraków’s first radial boulevards began to appear, with the city undergoing a large-scale program aimed at transforming the ancient Polish capital into a sophisticated regional center of the Austro-Hungarian Empire.

New representative government buildings and multi-story tenement houses were built around that time. Much of the urban planning beyond the walls of the Old Town was done by Polish architects and engineers trained in Vienna.

Some major projects of the era include the development of the Jagiellonian University’s new premises and the building of the Collegium Novum just west of the Old Town.

The imperial-style planning of the city’s further development continued until the return of Poland’s independence, following the First World War. Early modernist style in Kraków is represented by such masterpieces as the Palace of Art by Franciszek Mączyński and the ‘House under the Globe’.

Secession-style architecture, which had arrived in Kraków from Vienna, became popular towards the end of the Partitions.

With Poland’s regained independence came a major change in the fortunes of Kraków—now the second most important city of a sovereign nation. The state began to make new plans for the city development and commissioned a number of representative buildings. The predominant style for new projects was modernism with various interpretations of the art-deco style.

Important buildings constructed in the style of Polish modernism include the Feniks ‘LOT’ building on Basztowa Street, the Feniks department store on Main Square, and the Municipal Savings Bank on Szczepański Square. The Józef Piłsudski house is also of note as a particularly good example of interwar architecture in the city.

After the Second World War, the new government turned toward Soviet influence and Stalinist monumentalism. The doctrine of Socialist realism in Poland, as in other countries of the People’s Republics, was enforced from 1949 to 1956.

It involved all domains of art, but its most spectacular achievements were made in the field of urban design. The guidelines for this new trend were spelled-out in a 1949 resolution of the National Council of Party Architects.

The architecture was to become a weapon in establishing the new social order by the communists.

The ideological impact of urban design was valued more than aesthetics. It aimed at expressing persistence and power. This form of architecture was implemented in the new industrial district of Nowa Huta with apartment blocks constructed according to a Stalinist blueprint, with repetitious courtyards and wide, tree-lined avenues.

Since the style of the Renaissance was generally regarded as the most revered in old Polish architecture, it was also used for augmenting Poland’s Socialist national format.

However, in the course of incorporating the principles of Socialist realism, there were quite a few deviations introduced by the communists. One of these was to closely reflect Soviet architecture, which resulted in the majority of works blending into one another. From 1953, critical opinions in the Party were increasingly frequent, and the doctrine was given up in 1956 marking the end of Stalinism.

The soc-realist center of Nowa Huta is considered to be a meritorious monument of the times. This period in postwar architecture was followed by the mass construction of large Panel System apartment blocks, most of which were built outside the city center and thus do not encroach upon the beauty of the old or new towns. Some examples of the new style (e.g., Hotel Cracovia) recently listed as heritage monuments were built during the latter half of the 20th century in Kraków.

After the Revolutions of 1989 and the birth of the Third Republic in the latter half of the 20th century, a number of new architectural projects were completed, including the construction of large business parks and commercial facilities such as the Galeria Krakowska, or infrastructure investments like the Kraków Fast Tram.

A good example of this would be the Manggha Museum of Japanese Art and Technology designed by Arata Isozaki, the 2007-built Pawilon Wyspiański 2000, which is used as multi-purpose information and exhibition space, or the Małopolski Garden of Arts (Małopolski Ogród Sztuki), a multi-purpose exhibition and theatre complex located in the historic Old Town.